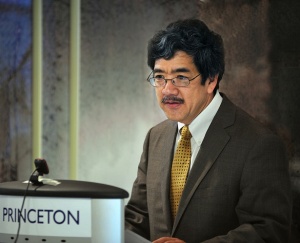 Princeton Consultants recently conducted its annual survey, begun in 2016, of transportation executives about their views of disruptive technologies and the impact on business areas. CEO Steve Sashihara summarized the results on a conference call with Stifel Managing Director of Research David Ross. Following is a lightly edited excerpt.

Half of the respondents are executives at carriers, 3PLs or brokers, 15 percent are shippers, 8 percent are suppliers, and about a quarter are in finance, government, and media. There have been 810 responses since 2016.

For each of these six potential disruptors (we added Blockchain in 2019), we asked, “How would you rate its impact?” We picked a time frame not too far in the future. We used a one‑to‑four scale: one means no impact; two means limited impact; three means moderate impact; and four means large impact. 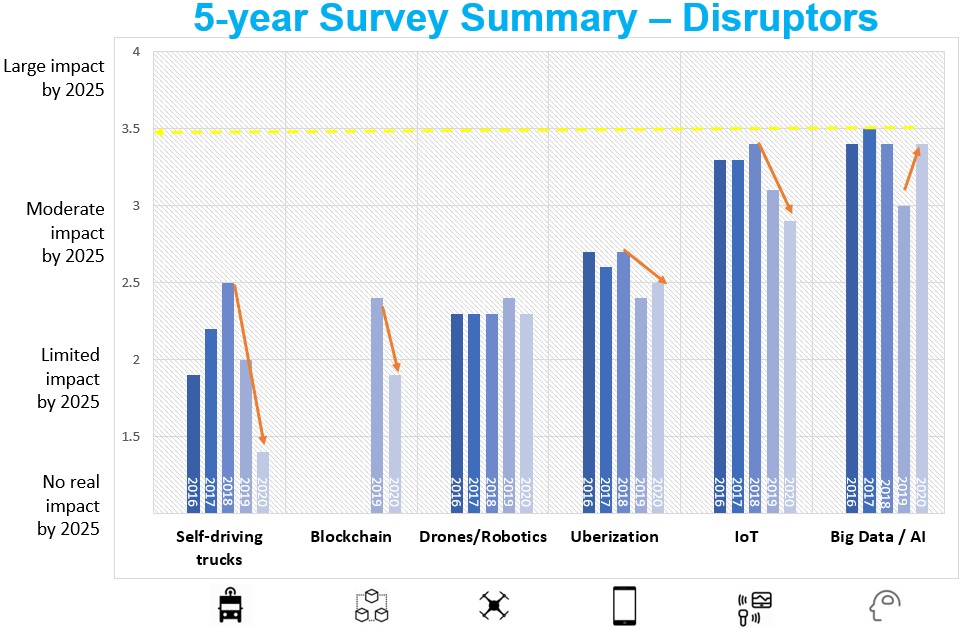 The orange arrows show a primitive trend line. You might think, seeing self‑driving trucks declining from 2.5 to less than 1.5, that executives are losing enthusiasm for self‑driving trucks—that they used to think that disruptor was going to change things and now are less sanguine about it. That may be true, but consider the Gartner Hype Cycle in which technologies such as self‑driving trucks or blockchain rise up the curve when everyone’s talking about them and then plummet into the trough of disillusionment. During the subsequent period in the Hype Cycle, when a technology slowly rises back up, it is perceived to begin to have the value initially thought.

I think, for impact on our industry, the DOT will have to recognize self‑driving trucks somewhat the way it recognizes teams. If I am a non‑driving member of a team, my hours are not affected when I’m not driving. If a driver is still burning DOT hours while the truck is self-driving, I don’t see much benefit. I prefer to say “self‑driving” rather than “driverless” because I think that there will still be a driver in the cab for the foreseeable future. The ability to self‑drive, to autopilot, relieve the driver of fatigue, and extend the hours that the driver is effective—that is the vision. As you can see, in our survey many executives do not think self-driving trucks will be very disruptive over the next five years.

There is a similar phenomenon with Blockchain. We added it to the survey in 2018 and started reporting in 2019. You can see that executives are less sanguine that Blockchain is going to be very disruptive. Once again, there are two ways to think about that. One is that maybe people are waking up and realizing this is further out than people think. On the other hand, maybe it’s becoming the new normal and so people are thinking of it less as disruption and more as just a way of doing business.

Drones/robotics is the third disruptor and it has been fairly level through the years. I think that is realistic. Within the last two months, many of you know that UPS went all in with drones, becoming the first Part 135 Standard certified drone airline. Many recognize this is potentially game‑changing. For example, during this pandemic, dropping masks or lightweight emergency supplies to remote hospitals makes a lot of sense.

When we first started calling the fourth disruptor “Uberization,” Uber itself did not have a freight brokerage. Roughly speaking, in this survey by Uberization we mean the disintermediation of middle parties between the carrier and the shipper--not the extinction of 3PLs or brokers, but making the whole transaction seamless and electronic without all kinds of EDI transfers and people logging into websites and keying in things and so forth. In our survey it has cooled off a bit, but executives largely feel it is coming and disruptive. I think that Uberization means better standards around transaction messages and in many ways is similar to initiatives with Blockchain. For example, the Blockchain in Transport Alliance has been pushing for an open standard. One of the problems with EDIs, web pages, emails, is that for 53‑foot dry commodity freight, the standards are pretty good. But if you are anywhere off that main use case— hazardous, oversized, temperature‑controlled or other freight types—you have to go off those standards. Even multi‑stop pickup or delivery has a slightly different way of doing it. Uberization is as much about getting everyone up to new standards that are high-information content as it is some kind of mobile app.

The last two disruptors, the Internet of Things and 5G, and Big Data and AI, have always scored very high in our survey. I am a little surprised to see IoT cool off a little bit, but there it is. At our firm, we strongly believe that Big Data and IoT are the most significant disruptors for our industry.

For commentary about business areas impacted by tech disruptors, visit this previous post.

We ended the survey with a sanity check question, “The general view of executives taking this survey is that digital disruption is coming. There are winners and losers. At Princeton Consultants, we certainly think that’s the case. Do you agree?” 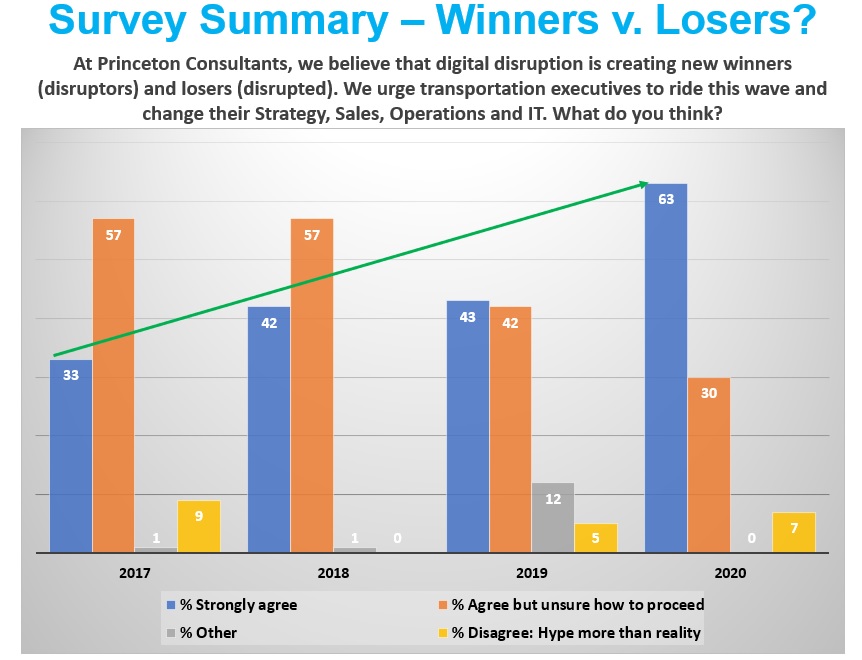 You can see when we first asked the question, a third of participants agreed that this disruption is coming, and you have got to change how you are doing business. Overwhelmingly, participants said, “We agree, but we are not sure exactly what to do.” The trend in our survey has been each year, the group that says, ‘We strongly agree. We have a program in place," has been growing and the group that says, “We agree but not sure what to do,” has been shrinking.

In no year has a significant group said, “Look, I think this is all just hype, all these new technologies—in 10-15 years from now freight transactions will look pretty similar. We will all still be emailing each other freight instructions, occasionally getting on the phone and calling.” To the contrary, during the course of our survey so far, the large majority of executives think, “These are real changes that are coming.”

To discuss tech disruption with Princeton Consultants' transportation practice leaders, email us to set up a conversation.