Optimizing Crew Utilization at an Airline 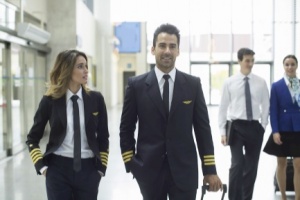 An international airline sought to transform flight scheduling and crewing decisions through state-of-the-art optimization. The airline’s network is notably complex, with planning required for unscheduled pickup and delivery between 13,000 worldwide airports in more than 179 countries, with over 700 planes. There are variable transit times due to weather and potentials for grounding due to equipment failures.

A subsequent initiative entailed balancing profitable asset utilization with the efficient utilization of the crews, which consist of pilots and flight attendants who belong to different unions and have different work requirements. In aviation, regulatory constraints include laws governing monthly duty time, maximum daily work hours, and other factors such as maximum continuous and weekly hours. Sometimes multiple jurisdictions apply: for example, a pilot flying from the U.S. to Europe moves from rules of the Federal Aviation Administration to those of the European Aviation Safety Agency. Additionally, business rules were requested to improve safety and mitigate the effects of fatigue for long distance flights spanning many time zones.

Before the initial optimization-powered system was built for the airline, crews bid on many different types of monthly schedule patterns, and then detailed crew scheduling was handled manually and relied heavily on rules of thumb. For example, the first and last day of a work schedule was typically devoted to a pilot or attendant’s transit to and from home, with little emphasis on revenue-generating flights. This practice stemmed from the need to plan crew duty time, and it projected flight coverage well in advance of actual bookings. The airline’s schedulers sought to avoid substantial overtime costs and penalties, eliminate significant owner satisfaction impacts when crew arrived late to an assigned flight, and minimize personal inconvenience when a crew member returned home late. Their rules of thumb were often overly conservative, leaving many hours of crew duty time unused each day.

Successful optimization requires both technical expertise and the “human side” of management consulting and change management, the latter of which are critical in workforce initiatives. Princeton Consultants worked iteratively with senior operational managers and subject matter experts to identify and assess prospective changes to the assignment and routing process, powered by optimization.

Ultimately, the system balanced crew utilization to the satisfaction of all parties. This upgrade was one step in the continuous improvement of forecast planning (30-60 days out), advanced planning (1-2 days out), and real-time day-of-execution service management, dispatching and service recovery. Additional upgrades have included better scheduling metrics and the replacement of allegedly optimal schedules with more robust ones that held up better as daily operating conditions changed.