The Optimization Vision: Designing Your Project 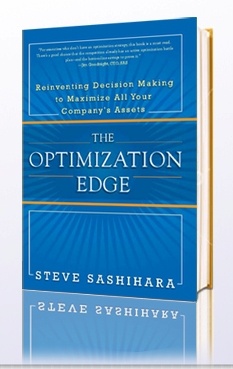 Much more is involved in the designing step of an optimization project than in designing a traditional IT project plan. The former involves creating a detailed vision of how the software will work, what kind of value the optimization software can bring to the organization, and the steps by which the software development will be carried out.

One of the quickest ways to scuttle an optimization project is to view it as “just another IT project.” True, optimization uses computers, but therein ends the similarity. Traditional IT projects begin by specifying end results. A firm set of requirements and a program design are set down before the designers proceed through a sequential set of steps, including development, testing, and rollout. Ideally, each of these steps relates to a detailed project plan that was created at the outset of the project. While some application programming is performed, along with selection of “off-the-shelf” components, it is rare for a traditional IT project to engage in true research and development (R&D).

In contrast, optimization projects tend to be far more fluid and creative. Most do not lend themselves to off-the-shelf software solutions; they require continuous R&D and experimentation. An optimization project is akin to developing a new type of material. At the outset, the material seems promising for a number of applications, but you are just not sure. So you test a few alternatives and assess the results. Often the first material tested lacks a critical property that leads to further refinement and retesting. It’s a cycle that can be repeated many times.

That is the flavor of optimization R&D: “Let us try a few things, see how they work, see how people like them, see how quickly we can arrive at a solution, see if the solution is the correct one or if more data is required. If it’s working, let’s build on it; if not, let’s revise and try again.”

In our experience, successful optimization plans have three important characteristics:

The many activities involved in designing an optimization project fall into three major categories:

This post is excerpted from The Optimization Edge: Reinventing Decision Making to Maximize All Your Company’s Assets (McGraw Hill) by Steve Sashihara, www.optimizationedge.com.